All animals, including humans, learn through Classical and Operant conditioning. Classical conditioning was first named by Pavlov and involves pairing one stimulus that has no effect on behavior with another stimulus that does elicit a behavior. With consistent pairings, both stimuli will elicit the behavior. Think of Pavlov's dogs. He rang a bell before presenting food. Initially, the sight/smell of the food caused the dogs to salivate. The bell had no effect. Over consistent pairings, the sound of the bell began to cause the dogs to salivate. This is Classical Conditioning.

Operant Conditioning was first named by BF Skinner and explains how each behavior has a consequence. That consequence is either reinforcing (leading to an increase in the behavior), punishing (leading to a decrease in behavior) or neutral (causing no change in the behavior). For the purposes of this course, we are going to concentrate on Operant Conditioning. It is important to understand if your interactions with a dog are reinforcing or punishing. The best way to know is to determine if the desired behavior is increasing or decreasing. For example, if you are working with a dog and you pat him on the head as a "reward," does the dog come close to you willingly for more pats? Then the patting is reinforcing. Or does he keep his distance to avoid the pats? Then the pats are punishing.

As force-free advocates, we think it's important that all interactions with animals be as positive an experience as possible. So let's discuss in detail the theories behind reinforcement and punishment.

This video will help clarify the terms regarding punishment and reinforcement.

Negative Reinforcement (R-) - removing a stimulus to increase behavior. The cessation of the seat belt alarm (removing the annoying sound) will increase the likelihood of putting on your seat belt (safe driving).

Positive Punishment (P+) - adding a stimulus to decrease behavior. If you speed and get caught, you will get a ticket (stimulus added) and will not want to speed again (hopefully). 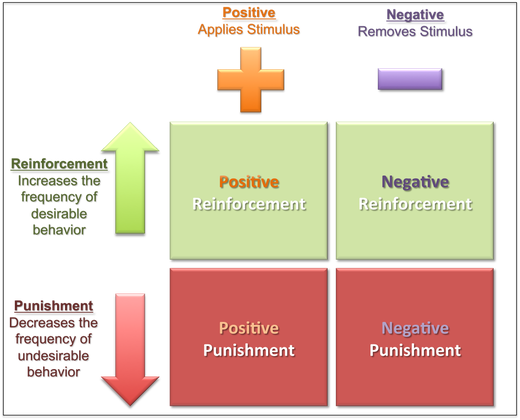 Is Punishment an Effective Way to Change the Behavior of Dogs?

Note from Karen Pryor: "(The 4 Quadrant diagram above is an) incorrect reference to the commonly seen chart illustrating the concepts of reinforcement and punishment. This description is misleading in two ways. It neglects to mention extinction, and it implies that all the principles of operant conditioning are of equal value in a training program."